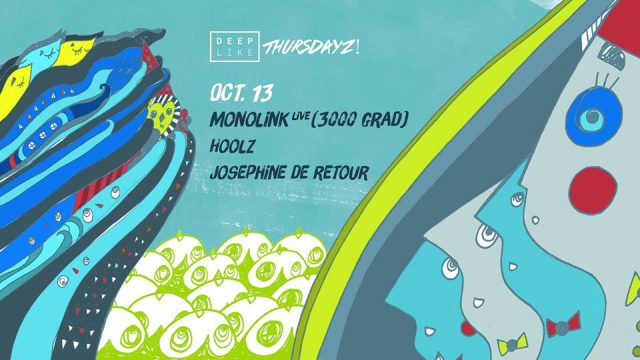 Watch out ! A hurricane is on it’s way, and his name is Monolink 😀
The artist is known for his impressive live sets, deep, emotional and energetic like we love them. Playing the electric guitar, singing and mixing at the same time, his one man show is said to be unforgettable.
Get ready for something different, a visually and musically breathtaking performance, and of course, as always in Deep Like, this will be Monolink’s premiere in the region ♥

See you on the dance floor !!

Singer-songwriter and Electronic music producer. To many that might sound like two very different aspects of modern sound culture – which in turn makes Monolink a fascinating character,because he’s both rolled into one. His style seamlessly connects the narrative structure of a song with the compelling forward thrust of electronic rhythms. Guitar chords merge into synthetic pad sounds, hypnotic bass vibrations meet emotional vocal parts, passionate physicality meets sublime stimulation for the mind.

Steffen Linck comes from a background that is often described with the wonderfully vague term “guitar music”. North American Folk, Blues… he’s never committed to a single style. And as much as he loves his guitar as a faithful companion on his musical journey – the songs composed for this instruments have a certain flaw. Thanks to melodic structure and the additionaluse of the human voice they have the power to tell a story – but all too often it’s just a very short pleasure. That’s why the Berlin based producer is fascinated by another genre that is synonymous with endurance: Electronic Dance Music. Its hypnotic rhythms create a very physical dance experienceduring long party nights. Already being active as a DJ besides his activity as guitarist and singer in various bands, it’s an obvious idea to connect both principles with each other.

A typical Monolink production evolves around a song written on his guitar. It serves as the backbone for percussions, samples, and vocal parts which are usually recorded during spontaneous jam sessions. When performing live he plays this original song in real-time, putting emphasis on a listening experience that is as clean and smooth as possible. The result has great impact on the dance floor, both in terms of sound and stage appearance. Monolink stirs serious euphoria at Fusion, Fuchsbau and 3000° Festival, as well as many other open airs. Also his gigs at trend-setting clubs of Berlin, like Ritter Butzke, Sisyphos or Keller, are highly applauded. In September 2014 a remix that has been produced together with Be.Svendsen climbs to the Top 20 of Beatport’s Electronica charts, in the beginning of 2015 he joins forces with the kindred soul of Acid Pauli for his “The End” EP. Speaking of kindred souls: Of course the open-minded crossover style of Monolink makes him a perfect match for the illustrious 3000° collective.

We love Tuesdays feat DJ Will

Bagatelle pres. Le Mardi J’adore for the French at heart